‘Black Friday’ has been mentioned a couple of times over the years on the OT•com that I can remember (here & here come to mind; there may be other mentions too?) - yet there is seemingly no dedicated thread for such a worthwhile and intriguing topic.

On 22nd November 1982, barely six months before the release of Return Of The Jedi, the finale of the Original Trilogy… George Lucas decided that roughly 100 visual effects shots - totalling an estimated four months of work and mostly taken from the film’s final battle sequence - weren’t completed to his satisfaction and had them all thrown out.

Ken Ralston and company all went out and “got loaded” after the axe fell, and ROTJ producer Howard Kazanjian was left speechless at $250,000 of work (in 1983 money) chucked. While some of the live-action elements of this material wound up on the blu-ray, and the ‘Making Of Return Of The Jedi’ e-book, none of these thrown-out effects have ever seen the light of day.

• Some articles and sources of information on Black Friday… 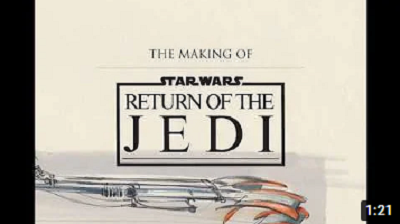 www.youtube.com/watch?v=XX_erQtz-KY - an 80 second video from the Muppet youtube channel.

^ A snippet of the above article, quotes from JW Rinzler:-

“I discovered this thing called ‘Black Friday’…where George [Lucas] just cut out a lot of effects shots, at pretty much the eleventh hour, causing [VFX supervisor] Ken Ralston to go out and get drunk! …It wasn’t a self-inflicted disaster, but I think they considered it at that time to be…not a disaster, but a big setback - for the good of the film, obviously… It was a big deal.”

^ 'One of the single most infamous days in the production of any Star Wars movie was Return of the Jedi’s “Black Friday.”

On November 22, 1982, barely six months before release, George Lucas decided that roughly 100 visual effects shots - totalling an estimated four months of work and mostly taken from the film’s final battle sequence - weren’t completed to his satisfaction and had them all thrown out.

The crew at Industrial Light & Magic were forced to start again from scratch, news which allegedly prompted many crew members to get extremely drunk.

The end result is certainly spectacular, but it’s easy to appreciate the VFX crew’s frustration at Lucas’ apparent inability to communicate exactly what he wanted at the outset.’

J.W. Rinzler Brings The Making of Star Wars: Return of the Jedi to NYCC - 2013 article at Coming Soon…

^ A snippet of the above article:-

‘Considering Lucas once cut over 100 shots in a single day of editing “Return of the Jedi,” it makes sense that the guy should be presented with an abundance of visual options for that stage of the filmmaking process. “Black Friday was something that even the people who had worked on the film had forgotten, but it was in the archives. George, in post-production, when he started editing the space battle and all the visual effects shots realized that there was a lot of work that needed to be done and it hadn’t been storyboarded the way he really wanted it to be.” Rinzler continued, “He threw out about upwards of 100 shots and upwards of three or four months work and the visual effects artist, Ken Ralston, the divisional effects supervisor, was most affected.” Rinzler dubbed Black Friday “a real low point in the post-production cycle.”’

^ 'The post-production process at Industrial Light and Magic on “Return of the Jedi” represents the gold-standard pinnacle of the bygone analog effects era. It would have been hard on any company, even one with as many geniuses as this one (Dennis Muren, Ken Ralston, Richard Edlund, Phil Tippett… even an 18-year-old David Fincher!), but coming off the tail-end of effects for “Poltergeist,” “E.T.” and “Star Trek II” meant everyone was ALREADY burnt the f**k out.

On November 22nd, Lucas dropped a morale-devastating bomb on the company in what came to be known as “Black Friday,” when certain subplot cuts (including the Death Star targeting Endor and Imperial countermeasures flooding the superstructure ducts of the battle station) caused nearly 100 FINISHED effects shots to be scrapped. Ken Ralston and company all went out and “got loaded” after the axe fell, and Kazanjian was left speechless at the quarter-million-dollars worth of work chucked. While some of the live-action elements of this material wound up on the Blu-ray archives, none of these effects have ever seen the light of day.

Steam was let off in a variety of ways, including some hilarious storyboards drawn by Joe Johnston showing Admiral Ackbar in a lobster bib or an Imperial trooper blowing the head of an Ewok.

"On what was dubbed “Black Friday”, 100,000 feet of film stock containing visual effects shots that couldn’t be read in an optical printer were unceremoniously dumped by George Lucas - a 2020 @agraphafx twitter thread

^ A screenshot of the thread:-

• If you know of any additional information on these thrown-away shots from ‘Black Friday’, please post them up in here…