I was going to check out that video, but I went to that guy’s channel and… 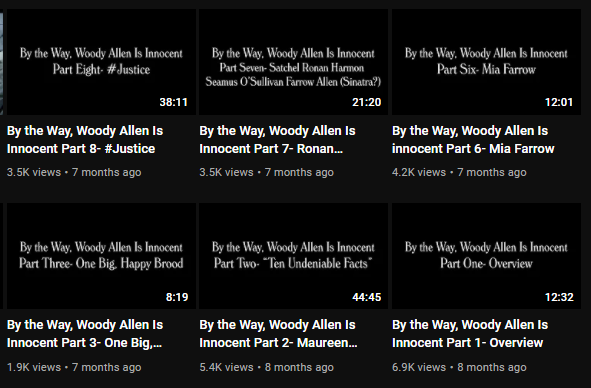 I seriously don’t understand what about the prequels or George Lucas attracts the minds of terrible people like this. And not just that, but also the fandom menace people/far right portion of the fan-base that seems to love the prequels. Those movies are actively against everything these people crave, as is Lucas, it’s just crazy to me. And then they just shit on the worst aspect of the sequels, with slurs and offenses to both cast and crew. Kelly and Daisy had to delete their social media accounts for fuck’s sake, this is insane to me, truly. I just don’t get it. Same people that go “Star Wars is political now! Get it off my movies!” …buddy, you seem to not have understood a single thing about Lucas’ 6 if that’s how you feel…

As Servii said let’s try not turning this into a political debate but for what it’s worth Rick is a raging liberal. He talks about it in his Woody Allen documentary. Your political views are irrelevant to what you find enjoyment in if it’s executed well in terms of story or what you find right or wrong in life. Sometimes they do mix. There’s a very personal story to the Prequels. It goes beyond just your ideology and feelings on certain things. The Sequels and Disney era are more openly political and coming from someone who doesn’t really get into politics I find it to be sometimes off putting. I go to stories for escapism or to learn something new or experience a new way of life. Sometimes I do seek a more political view but I’m neither liberal nor am I conservative. I’m somewhere in the middle leaning more left. There’s too much extremism when we look at things too black and white. Some definitely do take it too far. The Fandom Menace being the prime example but the great majority who dislike the Sequels have very well thought out reasoning behind their dislike of the films. It has nothing to do with Daisy Ridley or Kelly Marie Tran but the story not connecting with them personally or it doesn’t feel like they continued and respected what came before. It’s all a matter of personal tastes and prospective of what serves the story. It doesn’t make you a bad person to dislike the Sequels or any other era of Star Wars. Same with stories and art in general. Respecting creators including George should always take precedence to your beliefs. I may not like J.J’s take on Star Wars but I can still respect him and try finding things I do enjoy about what he’s made or just ignore him and accept he’s not to my tastes. Just as it doesn’t make Rick Worley a bad person to defend Woody Allen. He makes a compelling argument as to why he’s innocent but it’s up to the individual to decide if they want to believe him. Ignorance is bliss but challenging our beliefs is much more difficult. We must always try to put the needs of others before ourselves. Everyone deserves to be treated equally and fairly. Our experiences are all one of the same and that’s a very core value Star Wars teaches us. As it’s not about your ideology but what you do with that power that defines you.

I’ll leave with this quote from the late great Kenneth Clark:

“I believe that order is better than chaos, creation better than destruction. I prefer gentleness to violence, forgiveness to vendetta. On the whole I think that knowledge is preferable to ignorance, and I am sure that human sympathy is more valuable than ideology. I believe that in spite of recent triumphs of science, men haven’t changed much in the last two thousand years; and in consequence we must still try to learn from history. History is ourselves.”

For the full excerpt: