If there was ever the perfect embodiment of the “so bad it’s good” movie, this is it. I’m pretty convinced that this film have become a cult classic almost solely based on it’s fascinatingly bizarre production history (summarized in the trivia section below). 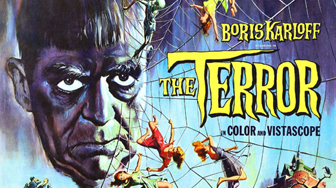 Synopsis:
A young officer in Napoleon’s Army pursues a mysterious woman to the castle of an elderly Baron.

Trivia:
The Terror began as a challenge to shoot most of a gothic film in two days using left over sets from The Raven (1963). It turned into the longest production of producer Roger Corman’s career – an ordeal that required five directors and nine months to complete.