Another Vincent Price horror classic, this time produced and directed by Wiliam Castle, a man notorious for his marketing gimmicks. 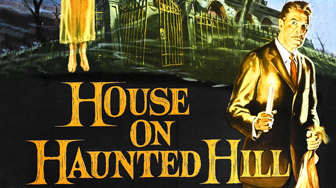 Synopsis:
A millionaire offers $10,000 to five people who agree to be locked in a large, spooky, rented house overnight with him and his wife.

Trivia:
The film is perhaps best known for a promotional gimmick used in the film’s original theatrical release called “Emergo.” In some theaters that showed the film, exhibitors rigged an elaborate pulley system near the theater screen which allowed a plastic skeleton to be flown over the audience during a corresponding scene late in the film.