You can’t have a thread with public domain movies without talking about the public domain movie, and what is essentially the birth of the modern concept of the slow moving, flesh-eating, virus-made zombie. For better or for worse George A. Romero created an entire genre with Night of the Living Dead and had the film not have fallen into the public domain from the get-go it would probably never have become the horror classic that it has become and instead bee relegated to cult classics status like most other low budget horror films of the time. 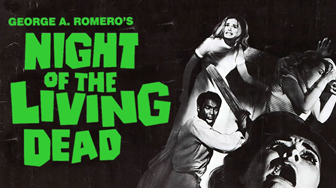 Synopsis:
A ragtag group of Pennsylvanians barricade themselves in an old farmhouse to remain safe from a horde of flesh-eating ghouls that are ravaging the East Coast of the United States.

Directed by George A. Romero.

Trivia:
Night of the Living Dead entered the public domain in the United States because the original theatrical distributor, the Walter Reade Organization, failed to place a copyright indication on the prints, and at that time, United States copyright law held that public dissemination required copyright notice to maintain a copyright.

And the colourized version if you wish to dabble in such things:
https://www.youtube.com/watch?v=TuknzfKw9t4