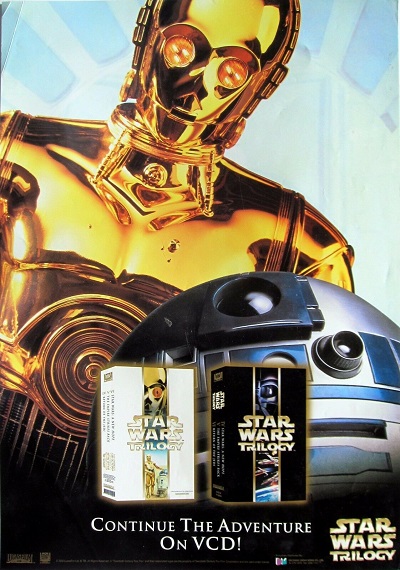 This set was the first official release of the Star Wars Original Trilogy on a digital video format - and was released in Malaysia and Singapore in 2000.

For fans who didn’t have relatively expensive laserdisc players (or somewhat obscure CED, VHD and Video8 formats), the official VCD release was a cheap way to be able to watch, navigate and re-watch the Original Trilogy films - without worrying about wearing out their video tapes or being chewed up by their video players!

The VCD release came with 6 discs in total - 2 discs for each film in the trilogy.

Video was presented in full frame (1.33:1) ‘pan and scan’, in MPEG1 standard, and was available in NTSC or PAL formats.

The artwork for this VCD set was similar to the more widely available VHS boxset release in 2000 - seen here at Wookieepedia.

Such was the popularity of this release (and other then-unavailable films on DVD)… that some far-east Asian retailers set up English language websites exporting the Original Trilogy VCD sets to the US, Canada, UK & Europe, Australia & New Zealand.

(a few on here got their VCD sets this way… cough… as well as from the likes of allvcd.com - and other popular based in Hong Kong)

Note: There were also a few ‘unofficial’ releases of the Original Trilogy available on VCD and DVD around 2000 too.

‘Okay grandpa, just what is a VCD?’ - I hear some of you young whippersnappers ask…

Video CD (abbreviated as VCD, and also known as Compact Disc Digital Video) is a home video format and the first format for distributing films on standard 120mm (4.7") optical discs. The format was widely adopted in Southeast Asia, Central Asia and the Middle East, superseding the VHS and Betamax systems in the regions until DVD-Video finally became affordable in the late 2000s.

The format is a standard digital data format for storing video on a compact disc. VCDs are playable in dedicated VCD players and widely playable in most DVD players, personal computers and some video game consoles. The Video CD standard was created in 1993 by Sony, Philips, Matsushita and JVC. 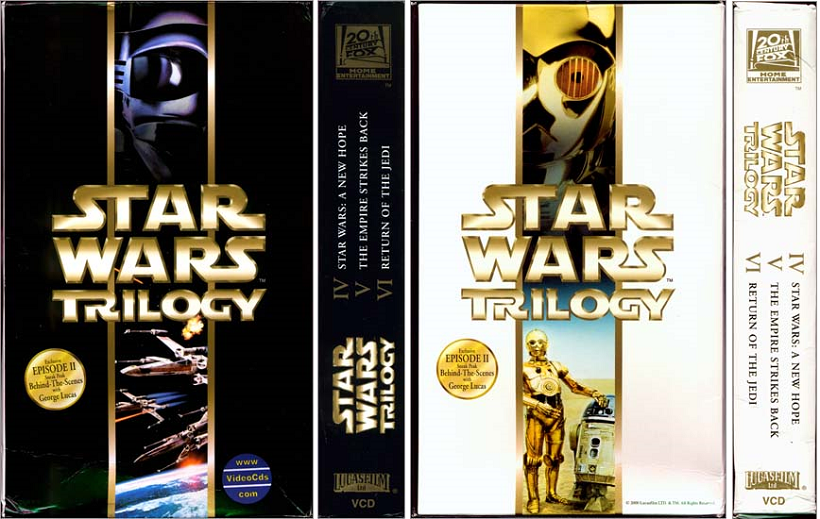 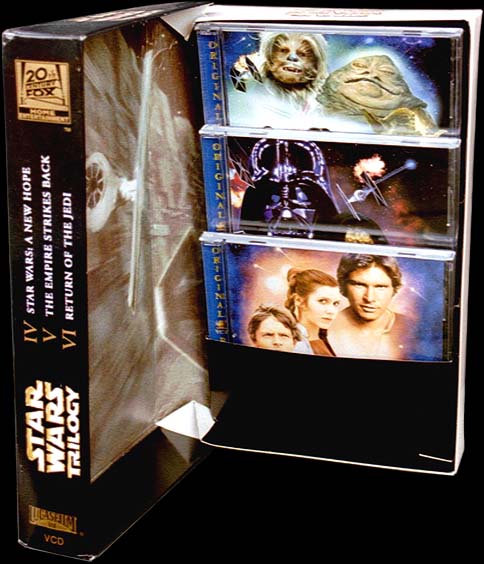 ^ all 3 images are taken from Video Collector’s superb SWonVideo.com site - well worth checking out for various OT release formats… 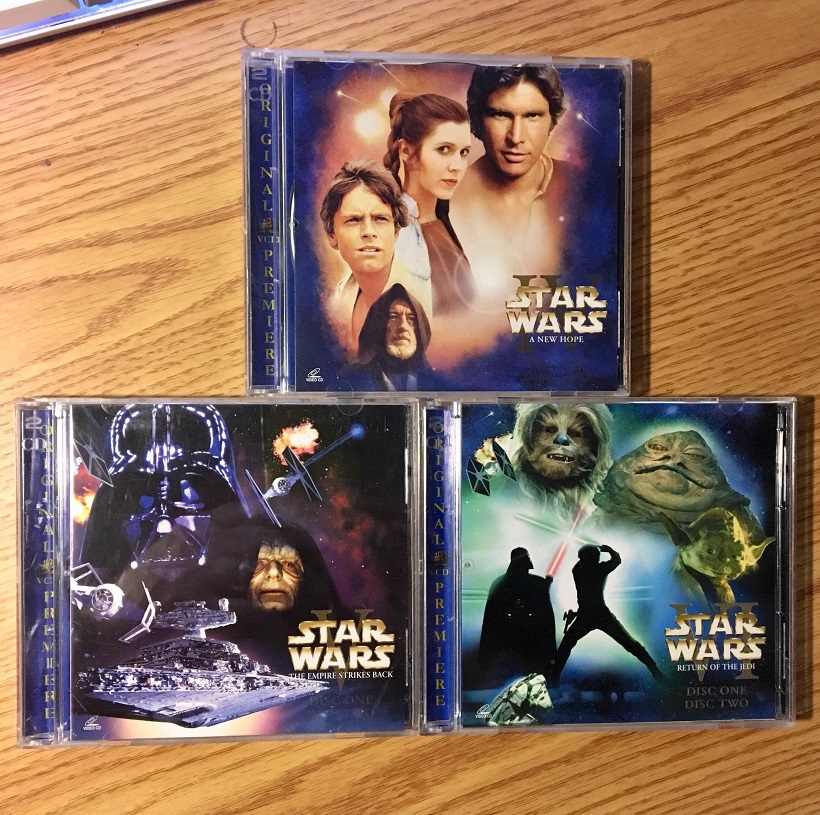 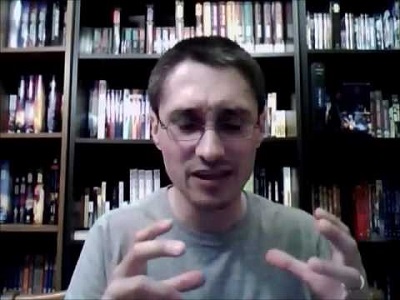 https://www.youtube.com/watch?v=SYY_GO3HMLk - a 9 minute video from the Nathan Butler youtube channel 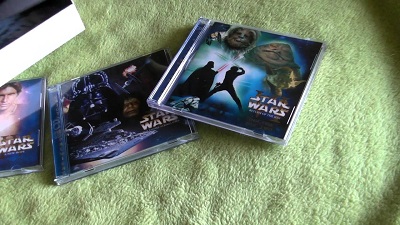 A few more images of the VCD set… 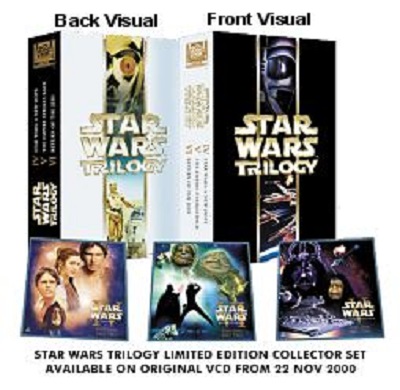 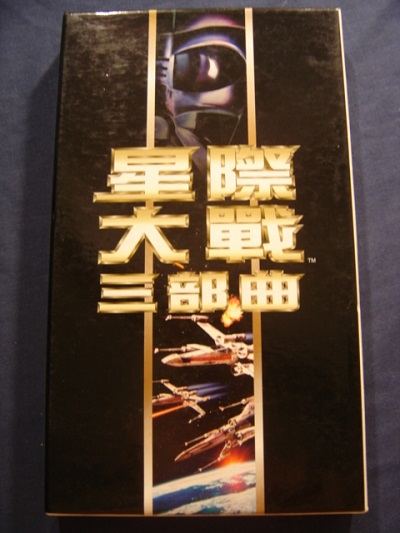 ^ a VCD boxset from Taiwan - with local language text on the box. 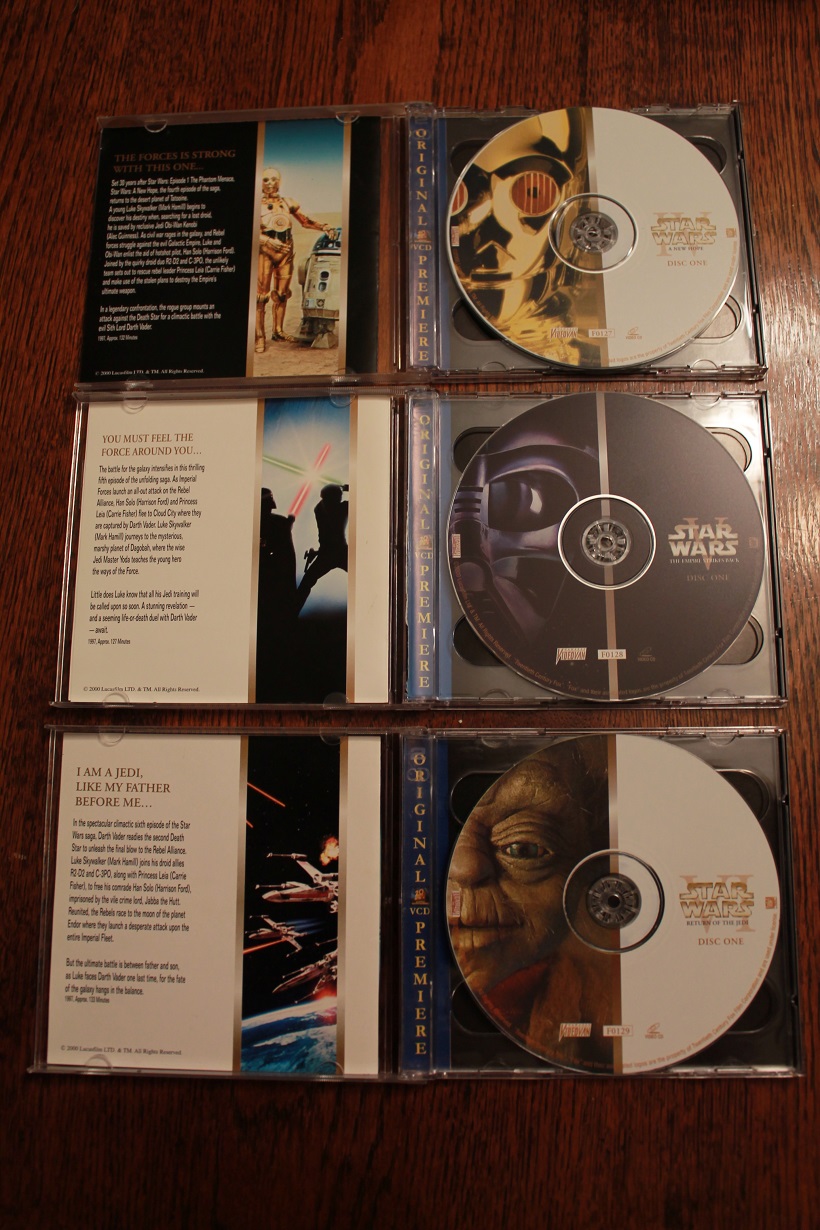 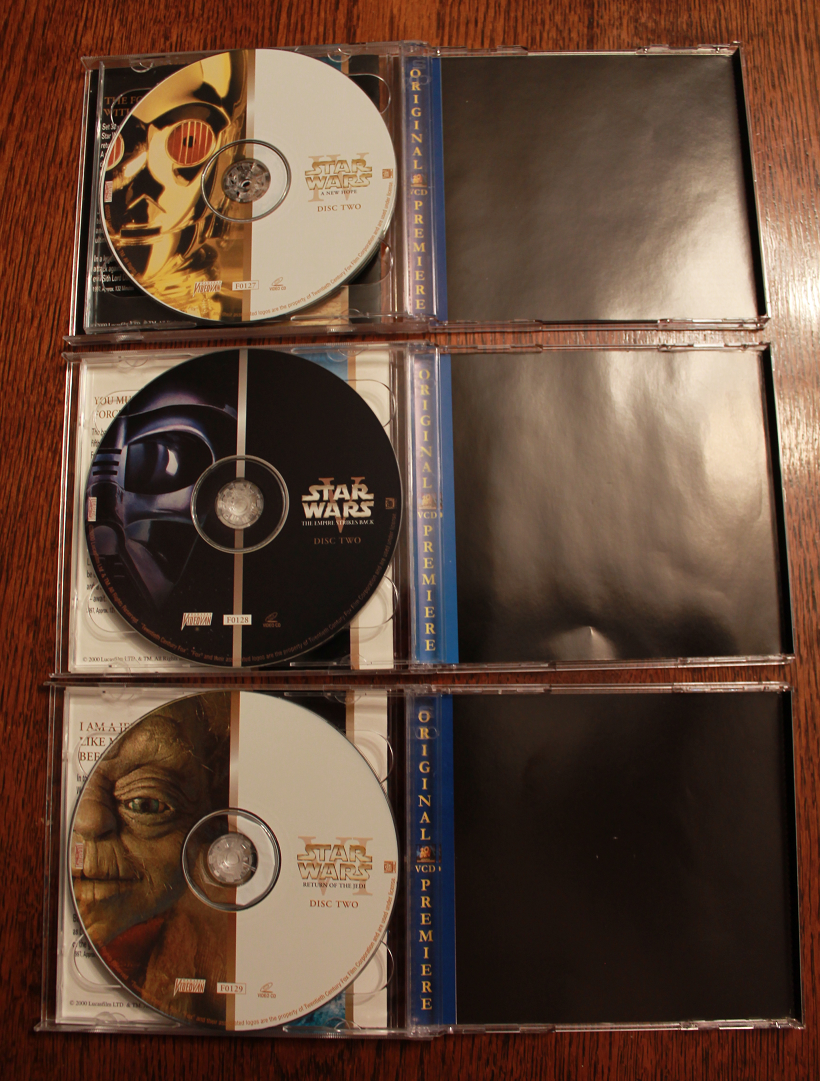 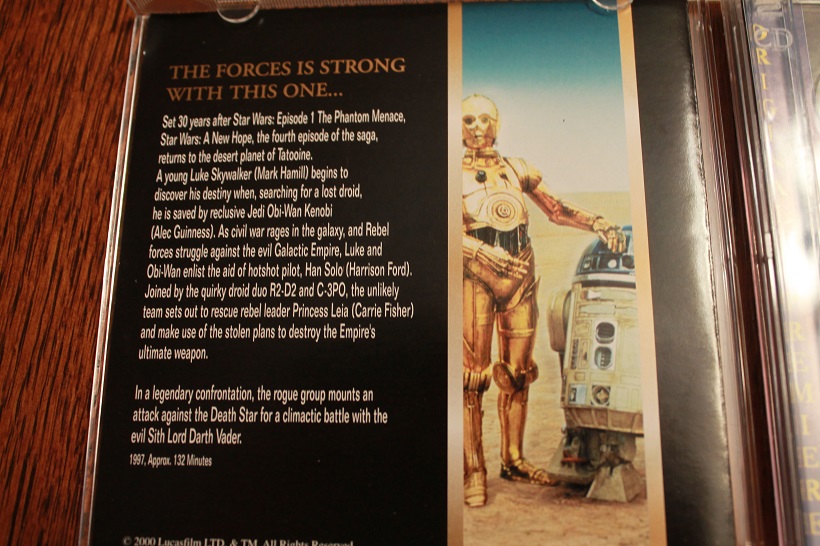 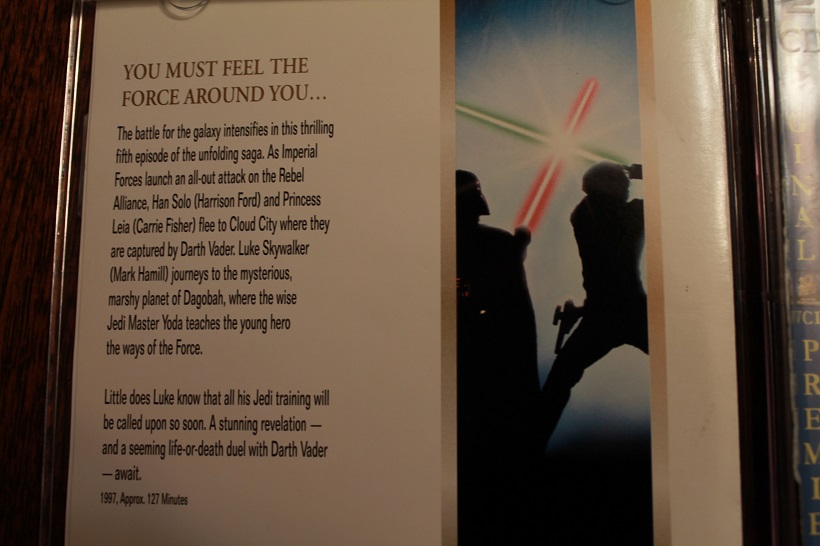 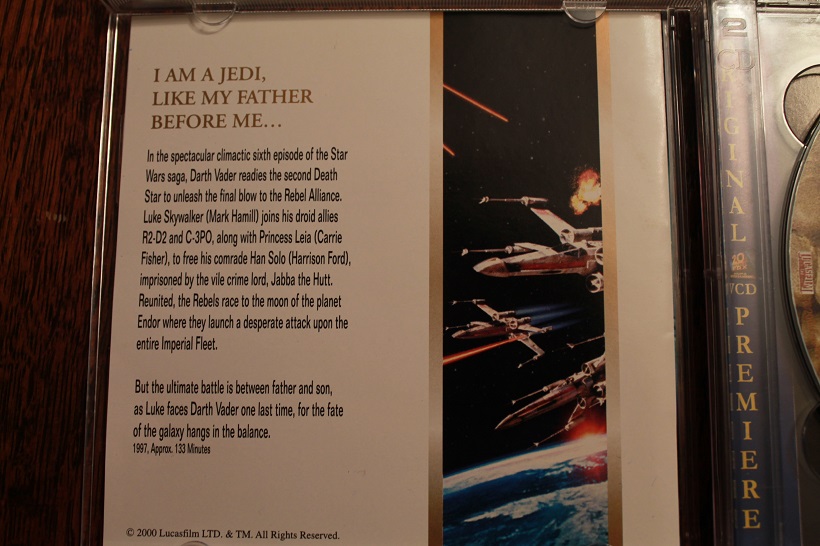 The Prequel Trilogy on VCD…

As can be seen on Video Collector’s informative SWonVideo.com website the Prequel Trilogy was also available on VCD…

About the VCD format as a whole… 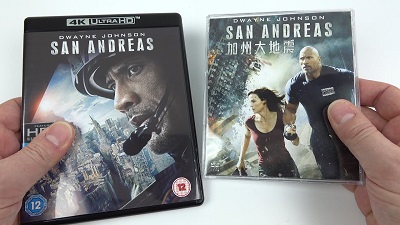