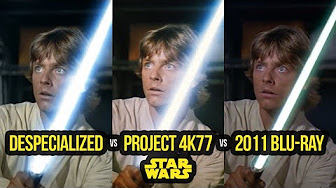 The blurb:
“Let’s take a look at Harmy’s Despecialized Edition, Project 4K77, and the official 2011 Star Wars Blu-Ray release. I’ll discuss some history of each project, and then jump into comparing all three versions.”

HelloGreedo has already done a few similar videos about this subject, but I think this is the best one so far. It succinctly summarizes the history of the three versions, adding just enough details about Harmy, Team negative 1, etc, while showcasing some of the biggest ANH differences and even commenting on the restoration community itself.