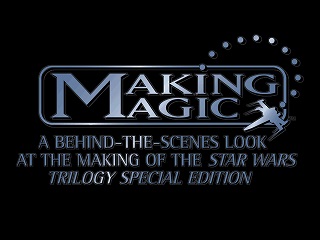 “Star Wars: Making Magic is an interactive CD-ROM released in 1996 by LucasArts as part of The LucasArts Archives Vol. II: Star Wars Collection (it was also included on the CD for Star Wars: Yoda Stories released in 1997). It was designed as a behind-the-scenes look at the production of Star Wars Trilogy Special Edition release. (from Wookieepedia; https://starwars.fandom.com/wiki/Star_Wars:_Making_Magic)”

^ Includes an interview with George Lucas discussing some of the scenes that were changed for the 1997 Special Editions.