The Mary Sue argument is not indicative of a personal attitude against women. That is ridiculous. A person can think that Rey is a Mary Sue without thinking that all other strong female characters are Mary Sues.

I wasn’t talking about the argument as a whole, I was refering to it in the context of ST criticism. As it turns out, in those films there’s no proof that Rey is some kind of overpowered protagonist with no flaws. She doubts herself constantly, characters can best her physically, and the bulk of The Last Jedi consists of her and other characters failing to do things. So naturally, her being described as Mary Sue raises a few eyebrows.

In the context of the first six films she is an overpowered protagonist, as she just has all these Force powers despite not getting any training within a matter of days

In this context Rey is seemingly no more overpowered as two of the main protagonists from those first six films; a 10 year old child who blows up the Control Ship in TPM whilst flying for the first time in space, or with Luke piloting an X-Wing in battle and going on to blow up the Death Star (just like flying T-16s, apparently 😉) - both of whom had little-to-no training; both also within a short amount of time.

It shouldn’t surprise you, that I disagree. While all protagonists have had their moments of “Gary Stu”-ness if you will, there are a couple of elements, that come into play here. For one there are a number of skills that have been consistently attributed to trained Jedi, or more experienced students of the Force, the Jedi mind trick, the Force pull, lifting rocks, etc have all been used to display the protagonist’s progression, or lack thereof, in learning the ways of the Force. In ROTJ Luke is shown performing the Jedi mind trick for the first time early in the film. This was clearly done to show how much his character had progressed since we last saw him, and since we saw Obi-Wan perform it in ANH, when we were all in awe of what a Jedi can do. It represented the point on the horizon, the impossible made possible by learning the ways of the Force. Having Rey perform the Jedi mind trick, and the Force pull at this early stage of the story diminishes that, and sets her apart, in that she apparently doesn’t have to go through the trials and tribulations, that previous protagonists had to go through to reach that point. Secondly, defeating the dark side apprentice has consistently been used as the sort of end-boss scenario throughout the films. It has been presented as the final trial a student faces before becoming a Jedi, and the moment, where the temptation of the dark side is at its peak, because it may help the student obtain victory, but at a terrible price. Again having Rey defeat Kylo Ren very early in the game, without a hint of temptation, diminishes what came before, and again sets her apart. I think these are legitimate, and reasonable criticisms of how the creators played fast and loose with the previously established lore, and thus invited accusations of the character being too powerful too soon, which in a more, and more polarized atmosphere resulted in Rey being labeled a “Mary Sue” by some of the more extreme corners of the fandom.

Rey learnt of these Force powers from Kylo Ren during her interrogation - and after some practice (and failure) comes to use one of these newly learnt Force powers.

A fact that was revealed in the novel, not in the film. I don’t think a film should rely on a book to provide such explanations.

but despite that her Force powers, and abilities still grow exponentially.

Can I ask what are Rey’s force powers that grow exponentially you are referring to? Are there examples of these powers growing ‘exponentially’? Stronger, sure. With more understanding of the them (late in the film) - of course; yet that likely comes from more practice over time - along with the teachings and training from Luke.

Practise over time would be a logical explanation, if the two films didn’t play out over a very short period of time. When Luke does a Force pull in TESB with great effort, most accepted this, because years had passed since the destruction of the Death Star. Practise over time, and discovering hidden powers with that practise makes sense in that context. Rey goes from being a newbie at the start of TFA to her and Kylo being pretty evenly matched in their fight against Snoke’s guards, to this in what seems a matter of days: 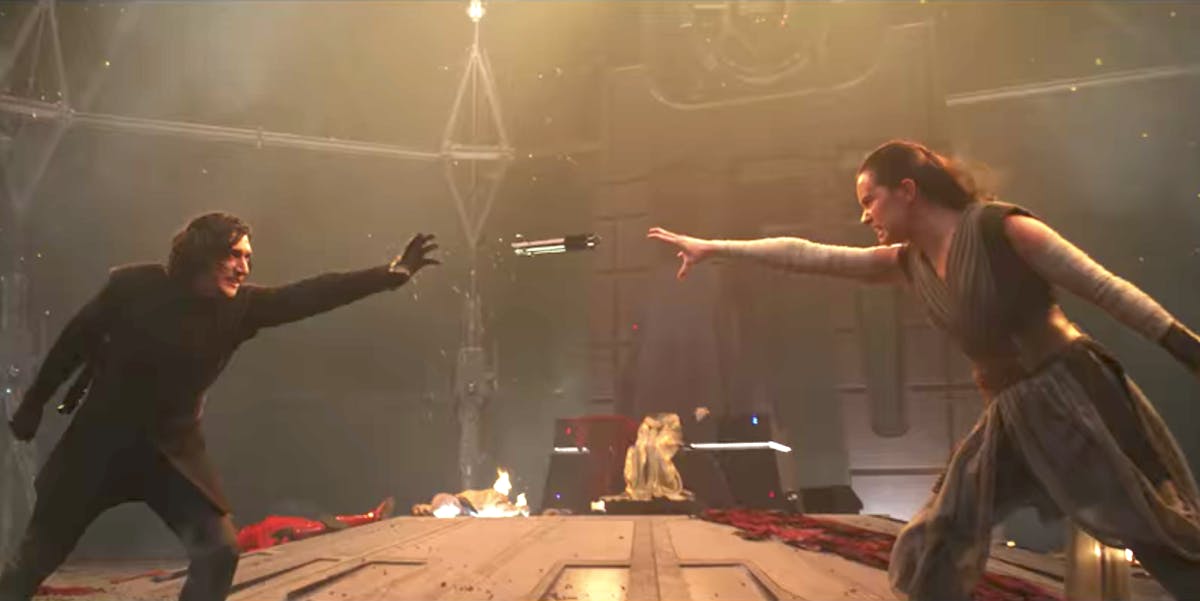 Rey thus progresses in her control over her Force powers over two films, like Luke did over a trilogy, which spans years, or like Anakin did over a trilogy, which spans over a decade. This would not be an issue, of we weren’t made aware, that the ST developments take place over a much shorter time span, and without the training, and guidance, that previous protagonists had recieved.

This is without considering the line from Snoke that ‘Darkness rises… and the light to meet it’ - which could indicate the Force is also using Rey to address a lack of balance of sorts - is it somehow amplifying these powers somehow? Possibly - hopefully we’ll learn more on this in the final part of the story (though I imagine many of us wish we’d have seen more of this in the two films so far).

Perhaps, but my issue with this is, that in my view this element of the story, which goes against everything previously established, has not been properly developed. It is mentioned in a few lines by Snoke, but her apparent special status in the canon is not recognized by either Luke or Yoda, who just speak of her like the next Jedi prodigy. Additionally, the idea that in the absence of the Jedi, the Force will bombard some unknown individual with amazing powers, defeats the whole purpose of the protagonists that preceeded her, because the element of choice, and temptation is largely taken out of the equation, turning her into some predestined champion of the good side. It inadvertedly sets up the idea, that had Luke, and Anakin failed to defeat Palpatine in the OT after years of training, struggling, and suffering, it wouldn’t really have mattered, because the Force would have just bombarded another innately good nobody with amazing powers to balance the scales, and get the job done in their stead. It is a form of deus ex machina, that in my view undermines the underlying themes of the saga up to that point.

She fails to convert Kylo, but Snoke is dead, she manages to escape the Supremacy without so much as a scratch,

Somewhat hyperbolic, yes? 😃 Though RogueLeader’s post on this answers some of this claim 😉

Yet, as stated above, Kylo turns her over to Snoke who would easily kill her if not for Kylo’s intervention / ambition. She also seemed to be in a fight for her life with Snoke’s guards - with both Kylo and Rey coming through it, just, upon teaming up with each other to defeat them. I’ll cover the non-physical wounds later below…

and despite discovering the truth about her parents, in the next scene is all smiles and giggles,

I’m not sure which scene you are referring to mate - yet I don’t think we can blame the editing of the film onto the character of Rey in the context here, regardless.

Why not? RJ chose to have Rey come to the Resistance’s rescue, and have her react like this after her apparent failure, and the revelations of her past:

He could have shown her being rattled, and distracted, and have Chewie remind her to keep her eyes on the ball. This is what I mean with a lack of consequences. It’s all a matter of buildup, and consistent tone. If you want, what has happened to her, to resonate with the viewer, it should resonate with the character:

I think these are legitimate, and reasonable criticisms of how her character was developed, and handled throughout this trilogy (thusfar). The fact that some critics use the controversial hyperbole “Mary Sue” as a vehicle to express those criticisms, and that there may be legitimate arguments, that invalidate the “Mary Sue” label, doesn’t automatically invalidate the underlying issues some of us have with her character, which would have been equally applicable, if it would have been another male protagonist.