As I recall the problem was only one mobile devices. On desktops, it looked fine. Then again, people are using mobile devices a lot these days. However, as I recall, my sig had been unchanged for a while(multiple months), without anyone complaining to me and that includes moderators.

No, members here had voiced displeasure at having to scroll past many consecutive posts made by yourself (or near-on consecutive posts seemingly in the Politics thread) in which the size of your signature took up half a page (so I think it likely they were referring to viewing the site on desktops) - often containing one word or one-line replies / answers - in each post - making them apparently ‘difficult’ to find and read.

I said no one, including moderators, complained TO ME. Maybe they did complain to you and Silverwook. YOU may have received complaints, but no one told ME until in the Star Trek thread in October of 2017. The question then is, why did you guys wait so long to bring them to me? (Yes Silverwook had raised complaints about my sig in Decemember of 2016 and I thought we resolved them, after that I didn’t receive any complaints until October of 2017 in the Star Trek Thread.)

‘photobucket wants $100’s from you to be able to 3rd party image link to’ type adverts in place of member signatures on here - a month or so earlier.

If that was talked about on the forum, I have forgotten.

Anyway, back to your signature… 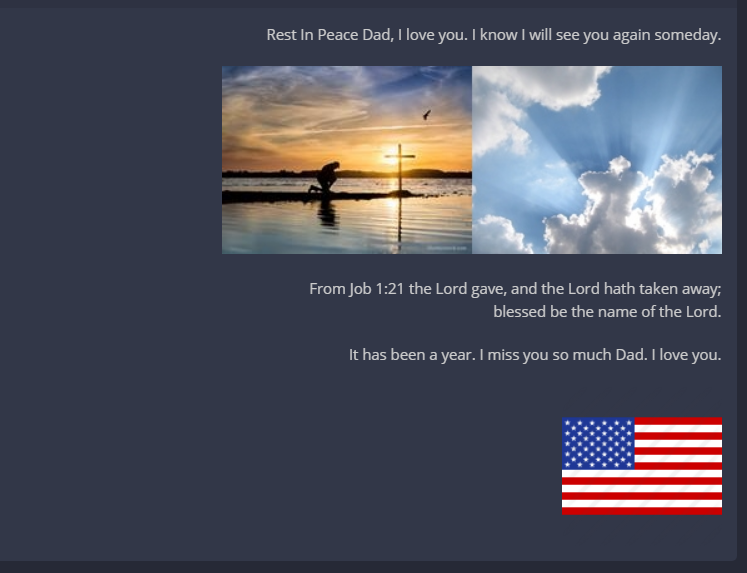 which can also be viewed here:-

Additionally, what made that situation personal, was the fact the in that sig was tribute to my father who had passed away about year before oojason complained about my sig.

For whatever reason, you forget to mention that both SilverWook and myself made mock-up alternative signatures for you - containing the same images and text in a more acceptable sized signatures (inkeeping with the rules). You declined them both (and further offers of adjustments/changes you may have preferred) which is fair enough

I did forget that. I am sorry. You are right, I should have mentioned that. That was wrong of me. But it doesn’t change my main point - which is my sig was unchanged for months without anyone, including moderators, complaining TO ME

And yeah, I turne your resized sigs down. At the time, I was upset and depressed about what was going on with the forum (and maybe personal stuff going on) and I just turned them down. Maybe if I had to do over again, I would use one of them, I don’t know. Again I should have mentioned all this, but I forgot and I didn’t. I was wrong and I am sorry about that.

All I know I that I was making my sigh posts just like I had always done and then suddenly when oojason became a moderator, it became problem. In any event, I think we all have to agree I do it a lot less these days.

A few members had issues with your repeated ‘sigh only’ posts over a reasonable amount of time (as an example - http://web.archive.org/web/20171029004630/http://originaltrilogy.com:80/topic/Politics-2-Electric-Boogaloo/id/53003/page/498 - a post by you in October '17 in which you sighed 9 times in a row as replies to other member’s posts - followed by another sigh later on on the same page.)

I sighed joke posts. I didn’t realize it would become such a bid deal. But still maintain my belief that I was not signing any more often than I used to.

Maybe when you state that ‘and then oojason suddenly became a moderator, it became a problem’ you meant that I was merely the mod who dealt with members’ continuing issues on your ‘sigh only’ posts at the time - web.archive.org/web/20171206053456/http://originaltrilogy.com:80/topic/Politics-2-Electric-Boogaloo/id/53003/page/556 (December, '17).

No other mod had complained to me about my sighing, not even Jay.

It seems my intent behind it to try and help you make your oft-valued points to others here (that was also explained at the time in a bid to try and cut down on misunderstandings to when you had previously posed ‘sighs’ and members would get the wrong end of the stick by you meant or what you were referring to - resulting in your original point being lost, forgotten or ignored. In a bid to improve the flow and understanding of the point you were making you were asked give an explanation along with when you sighed)… is (and was) lost on you. I think it’s also worth noting you didn’t seemingly have an issue with being asked to give an explanation alongside your ‘sighs’ until some time later.

Or maybe I just kept it to myself.

Just so everyone knows what oojason is referring to here. It image in question was one of a westboro baptists protester, holding up offensive signs. I was not posting it condone, or agree with what they do or condone or approve of paedophilia, bestiality, religious intolerance, racism, or homophobia. I think the westbor baptists are the scum of the earth. I absolutely hate what they do. oojason knowing me as long as he did, should known that would not approve of those things or the westboro baptists. I posted the pic to show that not all peaceful protesters are good people. I thought I had made that clear in the initial post. I thought, if the post was read in the contexts of the posts that had come before and with the accompanying text with the pic, that my reasons and intentions were clear. But turned out it was not. I made more clear my reason for posting the pic later on, but it was not done fast enough to suit oojason.

No, it wasn’t what I was referring to (DuracellEnergizer is correct with his post on the matter) - it was referencing Haseo’s image containing paedophilia, bestiality and religious intolerance (and IIRC was also racist). Haseo also described the image himself as ‘vile in nature’. I received some criticism for banning him for the incident - that’s fair enough if people disagreed. Yet I’d have still done exactly the same if such noxious images had again been posted on here.

Okay, my mistake. I thought you were talking about when I posted the Westboro Baptist pic. For all I know, Haseo got what he deserved.

As for the facts of the situation surrounding your 2-day cool-off period (and later 1 week temp-ban, later shortened to 3/4 days) I refer you to your own ‘A Statement from Warbler’ thread, here - link - and maybe give some time and consideration to what actually occurred at the time; and also to my two reply posts addressing your issues and queries - along with hyperbolic statements back then by yourself - just to refresh your consistently failing & selective memory of events.

I have re-read many times the “statement from Warbler thread” and the posts in the politics thread that led up to that thread being created. I have given it a lot of time and consideration to actually occurred.

I don’t know why that would baffle you. We(regular forums) have no idea what you do and do not discuss in private.

Admins and moderators talk with each often about many issues on site - which is likely the case on many websites & forums. It goes someway to having more consistent moderation throughout the forum - which is a positive thing - as you have previously stated here, yes? (just a rhetorical question - do not feel the need to answer).

I will answer anyway. Yes, it is a positive thing. Jay and the mods should be talking to each other about the many issues on the site. But like I said, If you did talk about this stuff, we(regular members would have no idea we can’t see this admin section). Given the inconsistent moderation, it seemed like you guys did not talk all that much.

It may well have been. But I say again neither he nor I ever seriously wanted Jay to kill himself.

Well, that’s obviously fine and okay to say (and love it and find it beautiful) such things if you don’t seriously mean them…

It is not fine and okay to say. But I think a lot of people are making it out to be worse than it is. It was said at a time when I was really angry Jay, right after multiple people got banned and one my favorite threads had been locked and vanished and politics was banned from the forum. I am sure you’ve never said rash things when you’ve been angry or upset .

It was not intended to be one-eyed. But you clearly had the ability to correct any inaccuracies that I had made.

It’d be more factual to say ‘you continue to correct many of my inaccuracies, false claims and my problems with moderator duties/decisions I don’t agree with’, yes?

You have corrected a few inaccuracies and brought up relevant info to the subject at hand that I had forgotten. But I give my word I never set out to intentionally deceive anyone. Your treatment of this shows what I mean when I say that you assume the worst about intentions. I admit that I have forgotten some important details which you have brought up? It is possible that it have forgotten things due to memory bias I don’t know. What I do know that I never intentionally tried to deceive or paint a false picture of what occurred. I don’t do that, despite what you might want to believe. For forgetting and failing to include important details, I apologize. Again it was not intentional.

You’ve made some of these (and more) false accusations & statements before - also previously rebuffed, and evidenced with facts too… yet here we are again… me refuting your somewhat one-eyed revisionist claims at best. Willfully deceiving and seemingly part of some sort of agenda at worst.

There has been no willful attempt to deceive from me.

That is your choice and it may be for the best. I think we past being able to straighten this out. I think we are just talking past each other at this point.

which has been only to correct your distorted claims. For whatever reason it is apparent you are trying to deceive and manipulate people into trying to believe your fictitious view… along with your likely forthcoming posts in here furthering your attempts to achieve just that… I hope others in here also see your false and inaccurate claims for just what they are… I’m no longer going to be a part of these twisted re-interpretations on your part.

There has been no twisted re-interpretations on my part at all. Honest mistakes? Yes. Willful deceit? no.

With you assuming I am this terrible person and believing that I am trying to deceive everyone and making false claims and what not, I guess there is not much more to discuss.

It is very sad that this has occurred, oojason. Very sad. I wish I knew how to fix this, but I don’t. You are going to believe what you want about me no matter what I say and do. It is clear to me that our biases against each other are affecting our views and memories of what happen. If you weren’t so intent on believing that I am sort sort of terrible lying deceiving scumbag, maybe we could fix this. But we can’t. Very sad.

As stated before… I wish you well for the future, Warbler - though I hope it is away from here, for both the good of the site - and also yourself. Good luck.

I am sorry I stole that loaf of bread.